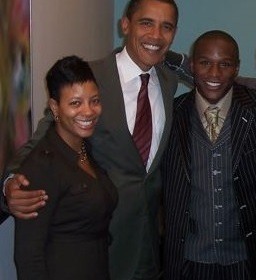 My final installment of Right Hand to the Champ looks at how Tasha Robinson-White rose to become a prominent member of Floyd Mayweather’s inner circle. She’s also very candid about how toxic and complicated their working relationship was. It was an experience that weaved her into the fabric of one of the most controversial and successful figures in sports history. When it was good, it was great. When things were bad, life with Floyd was almost unbearable.

Robinson-White was the gate keeper to booking him exclusively for club appearances. According to her, Mayweather made close to $500,000 from the appearances she booked for him from 2006 to 2008. Those bookings came with bonuses which allowed her to contribute to the well being of her family, but not to assuage the guilt of extended absences to be at Floyd’s beckon call.

The “Money May” seen making it rain in clubs all around the country was part of a brand built on entertainment. Tasha was convinced that these bookings would allow Floyd to explore television, film and other avenues outside of boxing. Especially since he revealed to her after his first retirement in 2008, he lost his passion for the sport. Something she believes he never truly got back. The problem was, every time she set-up a meeting with decision making executives, somehow Floyd would find a way to dismantle the deal.

Robinson-White was a buttress to Floyd Mayweather’s business perspicacity albeit behind the scenes, in a manner most would never know. Still to this day, individuals looking to do business with Floyd call her. Which confuses some as to her actual title. Tasha is adamant that she was never Floyd’s assistant. She was an executive building a company.

Even after their working relationship ended in 2009 due to a ($15 million business deal gone wrong), she continued to look out for her friend. After he was arrested and charged with eight crimes, including domestic violence against the mother of three of his children, and two felony counts of coercion for threatening to beat his son, Mayweather called Tasha with somber instructions. He directed her to find the suit he wished to be buried in and told her to tell his children he loved them. She stops short of saying the champ was suicidal, but she did reveal that at that moment she told him to seek professional counseling. How was her loyalty repaid? Three years later when her father passed due to lung cancer, Floyd offered to help with the expenses. Days later, he gave notice to one of her business partners booking him for an appearance. The $9,000 wasn’t a gift, it was a loan to be repaid on top of the booking.

Tasha Robinson-White worked with Floyd Mayweather during his climb to the pinnacle of the sport. Even without the major business mistakes, their working relationship had run it’s course. Today she’s a sought after entertainment and special events consultant. Down the road, Tasha sees herself more as a motivational speaker especially for young career driven women.

In the end, Tasha Robinson-White is as a woman whose passion for a career in entertainment revealed her purpose to inspire others to find theirs.

Check out Right Hand to the Champ:13 Lessons that Changed my Life here

tagged with Sourcing From Sports