Deconstructing the Roster in Youth Sports

Posted on August 20, 2016 by The Sportsnista Leave a comment

This week thousands of parents and siblings will find themselves perched on a hill behind the outfield of Howard J. Lamade Stadium. The iconic seating arrangement in South Williamsport, Pennsylvania will once again be descended upon during the Little League World series (LLWS).

It isn’t the most comfortable seat in the house. It is the most comforting though. Siblings slide about using cardboard box sleds to burn off excess energy. It’s been a long trip for them. At the same time, a collective of parents keeps an eye on their 11-13-year-old coming and going from plate to outfield.

Over the years, 18 young women have played in the summer classic. None more notable than Mo’ne Davis. Her Taney Dragons from Philadelphia, helped the Mid-Atlantic Region Champions make a storied run in the 2015 tournament. 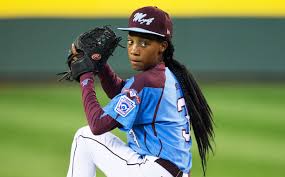 Davis, the first African-American girl to play in the LLWS was also the first girl to earn a win, and to pitch a shutout in LLWS 77 year history.

Mo’ne Davis and the young men taking the field this weekend were fortunate enough to make it from the bench to the batter’s box.

A trend in how teams are being constructed has been highly scrutinized in recent years. Leagues and coaches have been admonished for recruiting players outside of team boundaries.

The majority of kids aren’t gifted athletes; that includes at least two of mine. They’re driven to and from practice by an adult, usually a mother who has figured out a system to feed, clothe and complete homework in the car.

A spot on a team means a safe place for children to be. For the many single moms in this country, youth sports provide interaction with role models.

What you’ll never see in the stats is how important team inclusion is to so many families. In particular those raising girls.

It’s been estimated that 80% of all female CEOs played team sports. ESPNW in partnership with Ernst & Young published Where You’ll Find Your Next Leader, a report on how sport advances women on every level.

In terms of future career success, the report states: “One trait emerging is a background in athletics. But while nature drew them to sports, the women say the lessons learned gave them teamwork and leadership skills; discipline and perseverance; the courage to take risks; and the ability to learn from failure.”

For coaches making roster decisions consider the fact that participation in youth sports carries with it a lifetime of benefits. Most can’t reflected in Xs and Os.