Posted on November 18, 2015 by The Sportsnista 2 comments

It’s been said that “the journey of a thousand miles begins with a single step.” In theory, that step becomes a linear path towards a perceived destination of success. However, the deeper we get into the journey the more we realize success is not always a straight line. It’s more of a squiggly one leading from one place to the other, but always connected in some way.

For basketball legend God Shammgod, his first step an ankle breaking crossover, has been the impetus for a lifelong journey from Harlem, to Providence, RI, and to a handful of foreign countries in between. Popularized in the 90s, and dubbed “The Shammgod”, the move is one of the most difficult crossovers you’ll ever see. It requires the player to throw the ball in front of his body-get the defender to commit to moving to one side-before quickly pulling it back with his opposite hand-and slide into a crossover dribble. (Seriously, it all happens at once.) Of course God has disciples. Kobe Bryant, Chris Paul, and Kyrie Irving have all brought their take on the move to the NBA.

Known as Shammgod Wells growing up, once he got to Providence College he had to use his legal name, God Shammgod. (He prefers to be called Shamm.)

If you take a look at any draft, for any sport, you’ll inevitably run into the word “upside.” A big man with upside. A passer with upside. Shamm’s NBA draft “upside” was convoluted in 1997, when the underdog Friars moved on to the NCAA Elite Eight by upsetting the heavily favored Duke Blue Devils. To be fair, the team had divine inspiration against the Devils. A Priest named father Fergus Kiernan played saxophone in the pep band, while God ran the point.

Unfortunately, he sided with ill-advised persuasion to enter the draft following his sophomore year. He went on to play just 20 games for the Washington Wizards. “There’s no way to know what would have been,” he told a reporter in 2009. From 2001-2012 Shamm played for teams in Poland, Saudi Arabia and most notably China where he was awarded MVP twice in Zhejiang. 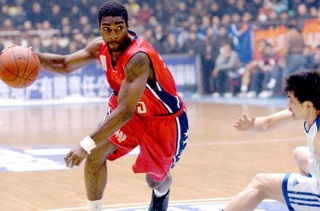 Once referring to his time in China as “The worst basketball experience of his life,” he now reflects on that adversity with sage advice for his oldest son, and namesake who plays basketball for Fairmont St. University. “I tell him pressure is a privilege.” That’s about right for a man who received his Life Coaching credentials two years ago.

Shamm’s path back to organized basketball in the United States began right where it started. He returned to Providence College as a graduate assistant after his 2012 season ended with Shanxi Zhongyu. Convinced that he was ready to make a transition to a different side of basketball, he opted out of his final two years in China, foregoing a substantial guaranteed contract. In the past three years at Providence, he has had a role in the development of guards Bryce Cotton and Kris Dunn, who were both first-team all-Big East selections. Not to mention the Big East Tournament Championship won by the team in 2014.

Shamm has been known by many names God, Baller, Father and now, graduate. He received his Bachelor’s degree in Leadership Development from Providence College in May of this year. The ceremony was 20 years in the making.

His life path is an interesting parallel to his profession. A true point guard looks to get everyone around him in position to score. He spoke with conviction when I asked him what he tells the young men he coaches about the business of the game. “You have to keep good people around you. I want them to know you can succeed in life even if you have to go in a different direction.” Indeed, squiggly lines still lead to a destination.

tagged with How We Source Our Lives From Sports, Sourcing From Sports